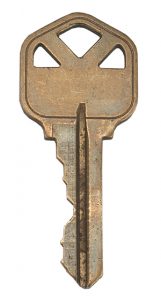 I got an interesting question regarding the technologies we use for authentication that I will discuss here. The gist of the question is that we try to go all out on the technologies we use for the authentication, even trying unsuitable technologies like biometrics, while, on the other hand, we still use fairly simple keys to open our house doors. Why is that? Why is the house secured with a simple key that could be photographed and copied and it seems sufficient nevertheless? Why then, for example, the biometrics is not enough as an authentication mechanism by comparison?

Ok, so let’s first look at the house key. The key is not really an identification or authentication device. It is an authorization device. The key says “I have the right to enter” without providing any identity whatsoever. So the whole principle is different here: whoever has the key has the authorization to enter. That’s why we protect the key and try not to give it to anyone – obtaining the key or obtaining a copy of the key is equivalent to obtaining an authorization to perform an action, like using the house.

Now, even if you do have a key, but you obtained it without the permission, that does not make you the owner of the place. You are still an intruder, so if someone happens to be around, they will identify you as an intruder and call the police who will be able to verify (authenticate) you as an intruder with an improperly obtained authorization (key). So we have deterrents in place that will provide additional layers of protection and we do not really need to go crazy on the keys themselves.

Should we have an authentication system compromised, however, the intruder would not be identified as such. On the contrary, he will be identified and authenticated as a proper legitimate user of the system with all the authorizations attached. That is definitely a problem – there is no further layer of protection in this case.